I filed for a DBA as such and then on October 1, 1967 I rented a storefront on State Street in Ithaca. I painted the store, built the bookshelves, the counter, etc. I ordered books and opened the store on November 15, 1967 with a small inventory including maybe 40 to 50 of my father’s books. Whatever money I received for my father’s books I gave to him knowing that my family’s financial needs were great.

Of course sales were sparse at first. I had expected this and had planned on paying the store rent from my salary, which I did for about two years. I worked the night shift (11:00 p.m. – 7:00 a.m.) at Gould’s Pumps and in the morning came to Ithaca to open the store and was there until 5:00-6:00 p.m. every day. I would then drive to Hector and sleep for a few hours. During the first year I had help from different people – Sidney Piburn, Jim Boehman – who would occasionally watch the store and wait on customers, etc. During this year people would come in, buy books and ask questions about them. Being just recently introduced to many of these ideas myself, I didn’t not know how to answer these questions and so I asked my father if he would come into the store and talk to these people and he was more than glad to do it. I told the people who wanted to meet with him when he would be coming to the store. For the next several months Anthony would come to the store when he could, depending on his work schedule (which, at the time was a rotating shift – one week 7a.m.-3p.m.; next week 3p.m.-11p.m.; third week 11p.m.-7a.m.) and, his still poor health. These visits were sporadic for the first few months. As he got stronger, Anthony requested the third shift at work so that he could be available on a more regular basis for discussions at the store. These discussions began with 8-10-12 people or so sitting around a large heating grate, smoking, talking and flicking cigarette butts into the grate.

As the number of students increased we began to hold regular weekly seminars. Within a year or so there might have been forty to fifty students who regularly attended these seminars.

At some point during this time Anthony began to invite his students over to his house in Hector for Sunday dinners. Soon, there were some fifty or so people at these dinners. In the following years there were approximately 3-4 classes a week being offered at the store – by Anthony as well as other members of the group, such as Lenny Silver and Richard Platek.

I was still working at Gould’s Pumps and at the store six days a week, still paying the rent for the store from my salary as well as contributing as much as I could to my mother and father’s household. I quit my job at Gould’s Pumps in April, 1970. At this point I was completely exhausted and just couldn’t maintain this schedule any longer. I lived in the back of the store for a couple of months and eventually got an apartment on Geneva Street in Ithaca. In late 1970 I moved the store two doors down the block because the landlord wanted to expand his own business and wanted my space so we switched stores. The new space was smaller and couldn’t accommodate the numbers of people who were coming to the classes. At this time Anthony, I and some others began looking for a larger space in which to hold classes. This is when the idea for Wisdom’s Goldenrod came about. After Wisdom’s Goldenrod was built Anthony and the students moved the classes to Hector, I believed that I would be losing a portion of my sales revenue and so I relocated the store again -onto the Ithaca Commons in order to attract new customers. At this point there were no more seminars or classes at the store. 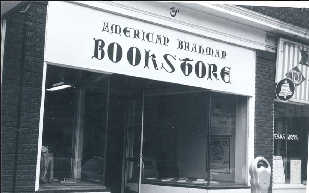 Steve Damiani (oldest son of Anthony and Ella May Damiani)