These words from the invocatory prelude to Anthony Damiani’s magnum opus, Astronoesis, convey his all-embracing spirit:

“The sublime majesty of Truth’s presence in the sacred sermons of so many wise ones, those of good will, ultimately guides us to the ways of peace and wisdom, the lovely, the holy. And so our troubled hearts are reassured, and we can read and reread about God’s word in many scriptures.

“However incomprehensible, a faith settles into our hearts that awakens the desire to understand Infinity and Forever. The dedication is eternal and to the Eternal. For the Word becomes flesh — and this is an eternal utterance, an act that includes the human heart mounted on a towering aspiration. Yet even this pyramiding love is without effect unless winged with Grace. So we shall let fly our supplications, enfolded in holy silence on wings of veneration, to the throne of our most Sovereign Good with the request to guide the spirit of our understanding, wherein we stand within God’s Light, in order to see the pouring out of the Sacred Word made manifest.”

For hundreds of us who met him in the 1960s and 1970s, Anthony Damiani was a man of many facets, any one of which would have made him remarkable. But first and foremost he was a man – a vital, passionate, kind, and dynamic human being who revered life by living sincerely. He saw the meanings embedded in each person’s experience as lines of a primordial scripture that one is born to embrace and understand – with and as one’s whole being. His genius lay in piercing the secular veneer, uncovering these meanings, and awakening the heart to an awareness of the sacred song at its core. This was a process of giving birth to truth, not as a conceptual exercise but as an act of love, an exquisite expression of the proper relation between a soul and its source.

Anthony’s mental energies were volcanic, as though surging upward from the very core of what compelled his attention. His burning desire to experience, understand, and express the undeniable significance of being human led him through a variety of life experiences and specialized fields of study. When he discussed spiritual philosophy, he often seemed incandescent with enthusiasm about the value of what he had discovered and could share, but he had little regard for pretension either in himself or others. While his generous spirit always encouraged us to be ourselves and supported each of us wholeheartedly in times of inner and outer personal difficulty, his penetrating gaze or mischievous humor soon deflated us when we became too puffed up about anything we thought we had learned. On first impression, he was the very antithesis of the conventional image of a spiritual teacher.

Anthony Damiani was born in 1922 into an Italian immigrant family on the Lower East Side of Manhattan, and grew up in Brooklyn. As a child and young man he suffered the fate of many a deep thinker: his long silences were interpreted by teachers as indicating a learning deficiency and he was often placed among the “slow learners” in his classes. Even then, he could not settle for surface appearances, pat answers to questions that were themselves too shallow, and read Plato secretly. His artistic nature first expressed itself in drawings and paintings that showed extraordinary sensitivity and perceptiveness.

Anthony spoke of two events in his youth that awakened him to the possibility of a higher life. One was when he first heard Schubert’s Quintet in C. He said, “Once I heard that piece, I knew there was a heaven.” The piece awakened in him a lifelong passion for inspired music and kindled a serious passion to become a classical pianist. The second came when he was watching a newsreel from India at a Brooklyn movie house. In the background of the main scene, he saw a yogi meditating on the sun. The image burned into his mind, and from that time forward learning the art of meditation became one of his main preoccupations.

He married his childhood sweetheart, and together they started a family which eventually included six sons. Though they had little money, he often spoke fondly in later life of how happy they were in their first Brooklyn flat. They had few domestic furnishings, having chosen instead to spend most of their earnings on inspiring books and a highly diversified collection of fine music.

Anthony had a variety of jobs, often two at a time. They included working as a waiter, then as a maitre d’hotel, spending nine years as a longshoreman on the New York City docks, and managing a major New York City bookstore. He also took many classes in philosophy at Brooklyn College, CCNY, and the New School for Social Research, though he chose not to earn an academic degree. As his family grew in size, it became increasingly difficult for him to find the time and quiet to continue his self-directed studies in philosophy and mysticism while earning enough money to support the family. His solution was to start working nights as a token seller in a relatively slow section of the New York subway system; there he was able to pass the night immersed in the thoughts of Plotinus, Buddha, Shankara, Patanjali and many other great sages — and earn money at the same time.

Possibly the most important single event in Anthony’s development was when he met the British philosopher Paul Brunton. From the day of their first meeting, Anthony felt that he had found his destined teacher. He was profoundly inspired by Paul Brunton’s ability to integrate mystical philosophy and modern science into an approach to self-realization especially suited for the modern mind, and to express his findings in clear English. The breadth and depth of Paul Brunton’s research, application, and personal achievement catalyzed Anthony’s own desire for a comprehensive updating and philosophic synthesis of the wisdom — practical and spiritual — of both East and West.

But Paul Brunton took no students formally, describing himself as “a writer and researcher, with some experience in these matters…that is all.” Anthony often had to be content with limited outer contact, making himself of service when appropriate, and acting primarily on the inspiration he drew from within himself from Paul Brunton’s example and occasional explicit instructions. Nonetheless, a unique and very special relationship developed through the years between these two genuinely remarkable men as Anthony learned that the best way to venerate one’s spiritual teacher is to work sincerely at becoming one’s own best self. In his “retirement,” Paul Brunton praised Anthony highly and often recommended him to people seeking help with their studies and personal development.

Shortly after meeting Paul Brunton, Anthony resolved to give up his study of the piano and focus his aspirations on meditation and philosophic studies. Listening to inspired music remained, however, an essential part of his inner development. Because music was for him more transparent than words as a vehicle of spiritual discovery, he often discovered his next guiding intuition through a piece of music, and integrated it deeply into his feelings before trying to approach it in an intellectual way. This practice was of such value to him that it later became an integral part of his teaching method.

The next major contribution to Anthony’s development came through a detailed study of the great Neoplatonic sage Plotinus. In Plotinus’ Enneads , Anthony found what he considered the most comprehensive extant statement of the metaphysical aspects of perennial philosophy, a teaching that complemented his understanding of Paul Brunton’s writings and held out the promise of answering his remaining questions. His studies of Plotinus and related Platonic teachings continued for the rest of his life and formed the foundation of his own most important creative work.

In 1963, the Damiani family moved out of New York City to the Finger Lakes region of upstate New York, where Anthony took a night job as a toll-taker on the New York Thruway, a job that like his subway work allowed time to study. In 1967, he suffered a severe heart attack and experienced death. He said later that during those moments when he thought he was leaving life behind, his heart overflowed with love and tenderness for all living beings. Though he had previously envisaged his new home as primarily a hermitage for retreat and study, harvesting the fruits of contemplation in relative solitude soon became unthinkable.

In 1968, he started giving classes in a small bookstore (The American Brahman Bookstore) in Ithaca, New York. He kept his night job on the Thruway and spent most of his days in the store. This store, with a statue of the Buddha in the window, attracted inquisitive students and teachers from Ithaca College and Cornell University, as well as many other people who just happened to be passing through town. The man inside soon legitimized and catalyzed our deepest spiritual urges.

In those days Anthony was a dynamo. He slept only a few hours between getting off his night job at seven in the morning and leaving for the store shortly after noon. At first, only a steady trickle of people came to buy or borrow books and then returned to discuss them with Anthony. Soon, the number of us eager to discuss spiritual issues or learn the art of mediation with him grew large enough that informal evening classes began in the back room of the store. Anthony often wore his toll-taker’s uniform while giving these classes, so that he could rush out at the last minute to drive fifty miles to make his 11:00 night shift on the Thruway. Within two years, his animated classes on Jung’s psychology, Hinduism, Buddhism, Christian Scholasticism, Platonism, Paul Brunton’s writings, and an exciting new approach to a genuinely spiritual astrology had attracted more people than the store could hold.

In 1972, Anthony and his wife Ella May donated five acres of their family land to what became Wisdom’s Goldenrod Center for Philosophic Studies, and we built its first buildings ourselves. Through the next seven years, we built three more buildings as our needs grew organically, including an extensive library. The library was dedicated in 1979 by His Holiness the XIVth Dalai Lama of Tibet, who spent three days with the Wisdom’s Goldenrod community on his first U.S. tour. The Dalai Lama praised Anthony’s activities at Wisdom’s Goldenrod as an excellent balance of the spiritual and practical, and he spoke of Anthony himself as “a truly great man.”

Throughout all the developments that took place, Anthony took great pains to present himself as a fellow student, not a teacher, and he always taught without payment of any kind. But after the Dalai Lama’s visit, it became obvious even to Anthony that he had become, even if unwittingly, a spiritual teacher.

Anthony Damiani died in October, 1984. He left behind a variety of materials that merit publication, including numerous essays, a nearly completed book on philosophic symbolism (later published as Astronoesis), and a wide selection of recorded classes on how various spiritual issues are treated in different philosophical and religious traditions. Three books — Looking into Mind, Standing in Your Own Way and Living Wisdom offer an opportunity to come into contact with some of the ideas that were discussed in the classes. 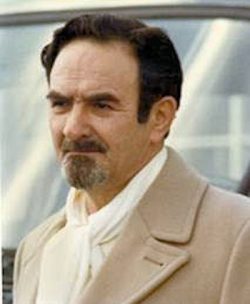 Anthony Damiani, awaiting the arrival of His Holiness the Dali Lama